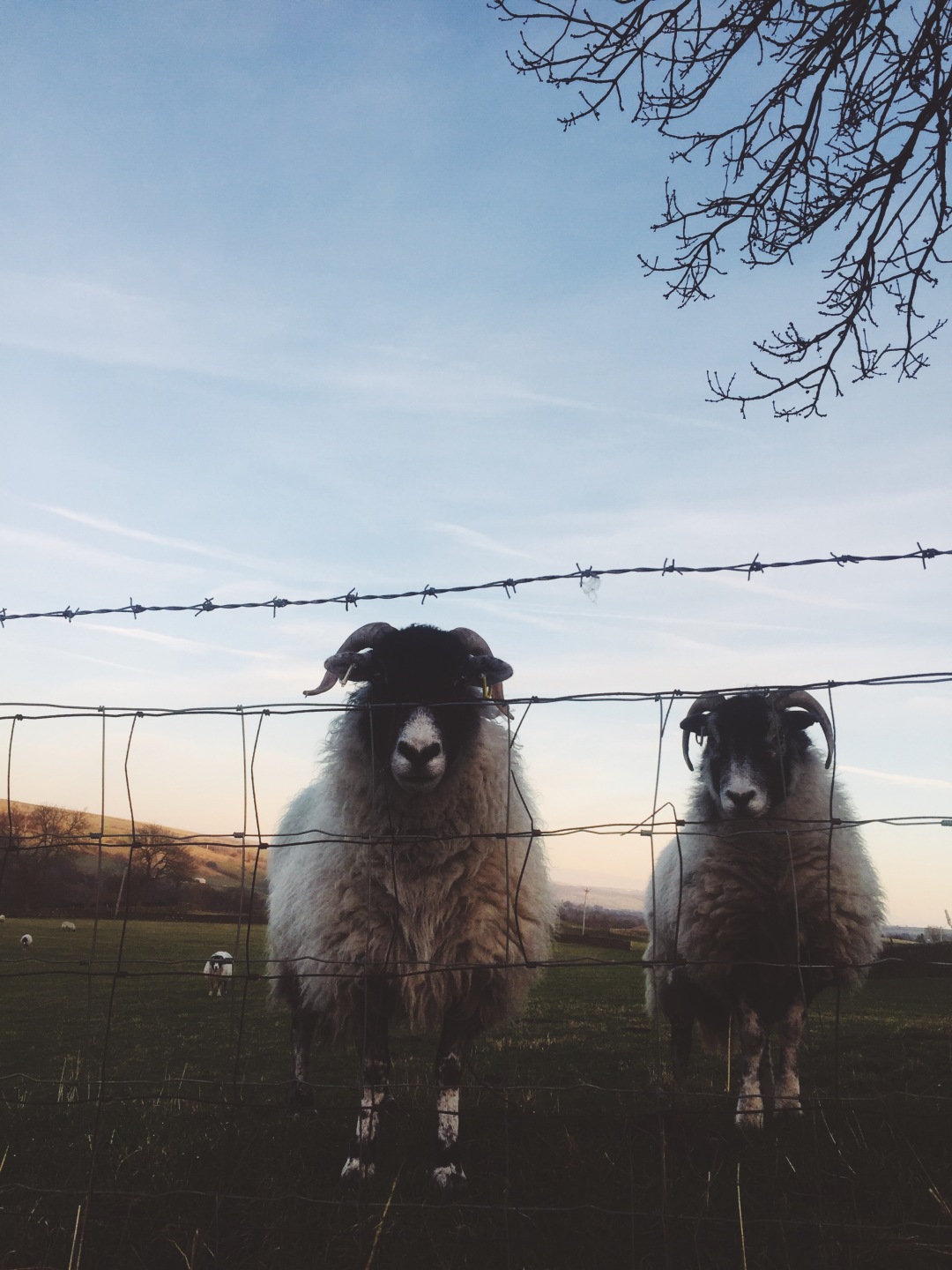 The Last Ewe: how learning to use my hands pulled me out of the void

The farm is silent. Which puts me on edge because the usual hum is absent and the soft spring wind is sounding more like a cruel whisper than a motivation. Scuffling from the shed leads me into one of the stalls to find Dan, Katherine, Alan and Tom crouching down in the freshly laid straw holding down a ewe. The last Ewe to birth.

Lambing has been relatively stress free this year, the weather has kept to a low level of brutality and the lambs have been strong. I crouch down in the straw and swap places with Tom who has the sheep’s head under his arm trying to stabilise her. Alan has her front legs, Tom now her middle, Dan has one of her back legs and Katherine is lying on her front with both arms inside of the ewe up to the elbow. There is an unspoken tension in the air as her breathing matches that of the sheep who is periodically thrashing. I have the ewe’s head in my palms, one hand scratching softly behind her ear, and the other stroking the spot between her rolling eyes, deep nut brown rounded disks in an amber sphere, now bloodshot.

Her breath is hot and steady up my wrist and I whisper ineffectually trying to calm her. There has been a complication, the lamb balled up inside of her is stuck and Katherine is using a piece of orange bailing twine to try and get a knot around the knees of the creature so she can pull it out. I have never felt my womb so viscerally as I did sat in the straw, watching the ewe writhing. My body’s empathetic capacity transferred into a hard physical ache emanating from my uterus, reaching down my legs and up my torso like hot water.

After an excruciatingly long twenty-five minutes of straining, smothering veterinary lube onto Katherine’s arms, and bouts of furtive exasperation, the lamb came free. Its tiny limp body was all legs, a fine transparent film of birthing fluid stretched across its tight woollen curls. But even when Dan placed his mouth over his little nostrils and blew air into his lungs, even when he swung him in an arc by his back legs to remove any fluid, even when he rubbed his protruding ribs with straw to stimulate blood flow while we watched on in silence, he didn’t get his first gulp of oxygen.

I have always felt pretty hardened to the realities of life on a farm, but there was an unspoken cruelty to this moment. I have seen lambs bleed from every orifice, I’ve found the hardened body of the family cat, watched as the terriers descended on a rat; all teeth, sinew and determination. But the trauma of the last ewe, that one I felt like a great bruise.

Hardness is something often attributed to those living precariously, in cold grey areas. A trait often attributed to the North. County Durham instilled a little hardness in me, a little grit, something I naively believed would push me through an undergraduate degree at Cambridge. But my grit became splintered, and by the time graduation came around I felt such an ominous bleak, sour, blackness consume me.

The day before I graduated my parents came to pack my things into the car, and I had entered what my mum calls the ‘empty shell’ phase. My family sat in my small, college bedroom while I tried to cover up my shaking by making them tea and moving about erratically; I didn’t have a great deal to give anyone but blank stares and garbled words. My only memories of the day come from Mum’s retrospective commentary. They watched me as I sat on the floor, placing clothes into bags, speaking fast but saying nothing at all, pulling out the clothes to start again and again, eyes darting, hands shaking from over-caffeination in a poorly disguised attempt to hide my exhaustion.

“County Durham instilled a little hardness in me, a little grit…But my grit became splintered, and by the time graduation came around I felt such an ominous bleak, sour, blackness consume me”

My best friend later told me she never thought I was myself during my three years in the Golden Prison. At first I was furious, but I think she was right. I lived on a self-constructed pillar of intense critique, enforced by the system I was living in. I wanted what they told me I should want, a first in my degree, a well paid job of repute, a flat in London, a Blue in sports; arbitrary milestones of ‘success’. I fell into the idea that to be successful you had to punish yourself until you achieved what everyone else was achieving, or what I deemed everyone else to be achieving. I obsessed over minor social interactions, starved myself of certain foods until I got an essay written (then binged), I drank eight coffees a day because if I was shaking I was proving to everyone that I was on the edge of success. Panic attacks swamped me with regularity and it didn’t matter that everyone could see through whatever front I was putting up. I was in a fog.

Needless to say that going to battle with yourself mentally and physically every day doesn’t lead to success. So my family took me home, back to the so-called hardness of the North, a place that seemed so green and the air so clear. And for a while it was hell.  It was hell for my parents and my sister. I was angry. Not achieving the degree I wanted was a sign of my failure, my lack of job was proof of how incapable I was, moving back in with my parents was a sign that I hadn’t pushed myself hard enough when it mattered most. I couldn’t move past the fact that I had wasted what were supposed to be the best years of my life.

And then I started to work on the farm again. A small family-run isolated hill farm at the top of the Dale I lived in. I’d worked there on and off for 7 years. And there I learnt to use my head properly, to use my limbs to construct things rather than fragment them. They taught me to build dry stone walls with bleeding hands in freezing temperatures on exposed hillsides. They taught me to pull down ceilings and rebuild them, to lay concrete floors, to build the perfect woodpile, to drive a tractor, to make corn beef pie, to cut down trees, to build a huge bonfire that would burn for hours, to eat mars bars at 10am and treat it as fuel, to treat an infected wound on a horse, to administer medicine, to treat wood worm in roof beams, to wrestle a ewe, to birth a lamb. They reminded me how to dispel my rage in a constructive way instead of directing it inwards, and how to work with change rather than rile against it silently.

“Learning to use my hands and my head in tandem taught me the importance of slow, incremental progress”

Life existed outside of the bubble of rigid academia, and I hadn’t been able to see that until I left it. I had been blind to how violent my attitude was towards myself and how much I had come to despise who I was. But learning to use my hands and my head in tandem taught me the importance of slow, incremental progress. The high speed pace of existence wasn’t all that realistic. I still worked 12 hours a day from sunrise to dusk, I worked three jobs six days a week but it was completely different. I felt the tide of self loathing that had engulfed me starting to ebb away and I found myself able to cope again.

Do not mistake me, there are moments when the panic comes again in great waves. Leaving Cambridge didn’t solve it, it was just a particularly fertile environment for the crushing anxiety that had been laying dormant within me. But a year of incremental progress and having my hands in the moorland and my lungs in the open air has allowed me to rationalise those bouts of darkness and to climb out of them on my own. And I can’t explain to you the simple, overwhelming pleasure of knowing I can deconstruct that wall of anxiety I built for myself, and rebuild it in the shape of something good.

2 thoughts on “The Last Ewe: how learning to use my hands pulled me out of the void”