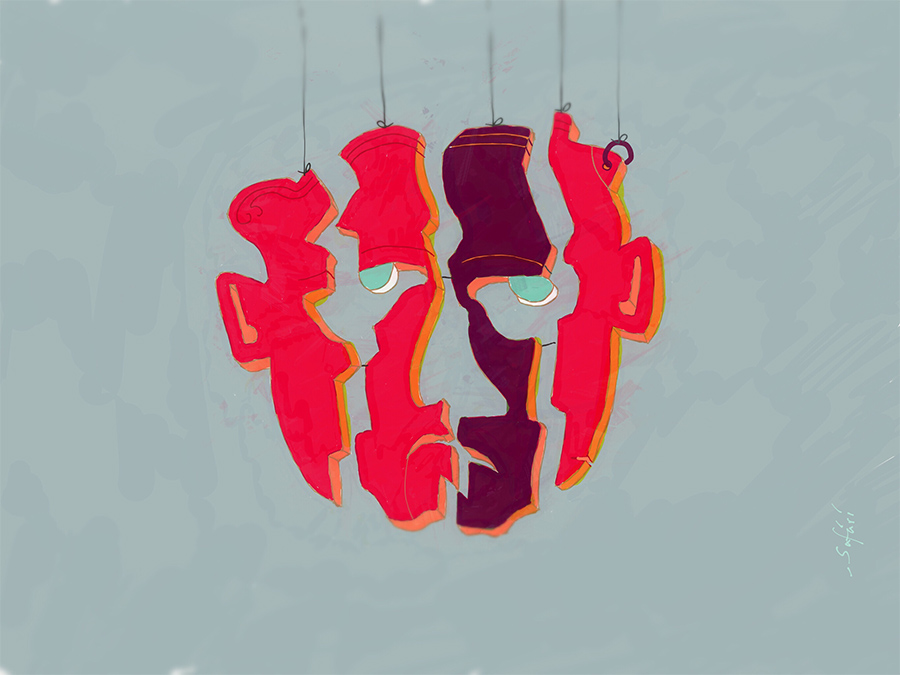 I’m running up and down the waiting room in my pyjamas, stolen Christmas baubles swinging from my hair. ‘Look everybody, it’s Emma the Unstoppable Genius, just look at her go!’, I chant to myself as I race up and down the room. A bauble in my hair comes off. It clatters to the floor, rolling towards a foot. I have the sudden realisation that feet belong to people, meaning I am not alone in this room. It starts to dawn on me that there are other people here – sick people. I am in a room filled with sick people, meaning I must be sick. I realise that I’m in accident and emergency. Only a moment ago, I was in my room, writing down my newly discovered Theory of Everything. Now, I’m in a hospital and a lovely nurse is staring at me, and asks me why I’m here. ‘Because I’m mad!’

Diagnostically speaking, I was manic. Undiagnosed at the time, madness seemed the best description. I’ve since been diagnosed with bipolar disorder type 1, a disorder that is characterised by periods of mania and periods of depression, and it’s now expected that I refer to myself as mentally ill rather than mad.

“All these depictions of madness have a few things in common: they are disturbances of thinking, resulting in displays of socially abnormal behaviour.”

I’m met with looks of discomfort if I call myself mad. It is a ‘bad word’ that we use to insult people and reserve for people we disagree with, from serial killers to Donald Trump. People also use it to insult the mentally ill. What people don’t realise is that madness is an integral part of my symptoms, so when I’m told not to use that word, I’m being told to hide central aspects of my mental illness.

What do we actually mean by the word madness? We think of a mad scientist, rushing around their laboratory all night, speaking fast and thinking even faster. We think of mad serial killers, with paranoid and deranged ideas about other people, detached from reality. We talk of going on a ‘mad one’, again, an activity filled with energy and strange excessive behaviour. All these depictions of madness have a few things in common: they are disturbances of thinking, resulting in high energy displays of socially abnormal behaviour. Pretty much the definition of how I display symptoms of mania.

My symptoms could easily be described as mad. As a depressed twelve year old, I had my first visual hallucination – a man wearing a bin bag, staring at me through the window. Years later, I’ve heard robot voices from pillows, believed my thoughts were being stolen by another world and thought I could discover the Theory of Everything via philosophy. My internal experiences have produced some pretty outwards displays of madness too. One time, I nearly got arrested for yelling at a stranger on a bus – I thought she was an angel sent from another planet to give me a message, and I become panicked when she wouldn’t tell me her secrets. She was just an old lady trying to do her shopping, but madness colours reality in a rather different way.

When we think of madness, we think of people like me. Family and friends are reluctant to accept this – I’m not how they picture madness to be, because they’ve known me when I’m well. They see me as their daughter, childhood friend, colleague, girlfriend, sister or cousin. They don’t see me as the girl who yells at strangers on public transport, or thinks the motorway signs are messages from another reality. People remember me for the things I do when I’m well, and I’m grateful for that, but seeing past my illness is not the same as erasing it from view altogether.

“People say they would support others with mental illness, but shy away when sufferers begin to show symptoms that are hard to deal with.”

By telling me I’m not mad, they are ignoring the less palatable aspects of my mental illness that they do not want to see. Without accepting my madness, they are not accepting my psychosis and mania. Madness sometimes describes my symptoms, so when people tell me it is unacceptable to describe myself as mad, they are telling me that my symptoms are unacceptable to them. Too often, people say they would support others with mental illness, but shy away when sufferers begin to show symptoms that are hard to deal with. Offering true support to people with mental illness will mean accepting all their symptoms – this includes acknowledgement that they might sometimes be mad, and letting sufferers call themselves that.

I’ve explained this to people as best I can, but I’m still policed on my use of the word. People ask me ‘Why would you want to call your symptoms madness? It’s an insulting word for mental illness’. The point is, it’s only an insulting word if we continue to let it be. Madness is used by the media to describe the mentally ill in a derogatory way, just as queer was used to describe the LGBT+ community. If we reclaim the word, it loses it’s power as an insult. If ordinary people with mental illness start to openly identify as mad, it won’t continue to be a word used to exclusively describe people who have done bad things. By accepting our madness, we make it acceptable to ourselves, and eventually to others.

Besides, other people will always call me mad. I’ve been called mad most my life. On the playground at the age of seven, a boy in my class walked up to me. ‘You’re mad’, he said, pulling ‘coo coo’ signs. A few others joined in, chanting that I should be put in a ‘loony bin’. I wasn’t entirely sure what a loony bin was, but I didn’t like the sound of it. Uncharacteristically confident, I held my head up high and said ‘Yes, I am mad’. I danced around a bit, to demonstrate my madness, and felt I’d passed some invisible test. I remained safe on the playground, away from any bins. By announcing my madness, it lost it’s power as an insult. After that, my friends started to refer to me as ‘Mad Emma’, but in a friendly and endearing way, similar to how someone might be described as tall or sporty.

“People will call me mad, whether I like it or not. Given this, I might as well try to direct the conversation.”

I’m twenty now, but but the judgement is still there, from the neighbours that avoid my eye, to the freshers that side-step me when I visit college, to the acquaintances that stare silently and wait for me to do something characteristically crazy. Madness is used to describe outward displays of ‘strange’ behaviour or a detachment from reality. I fit the criteria, so people will call me mad, whether I like it or not. Given this, I might as well try to direct the conversation. Rather than pretend those symptoms don’t exist, or try to shut down the use of the word, I’d prefer to take charge of it. I have symptoms that people might call madness, and I’m not ashamed of it. Please don’t tell me to keep quiet and avoid calling myself mad, because for me, madness is unavoidable – both in the symptoms of my illness and how others treat me.

We hear of mad axe murderers, mad patients in hospital, mad old ladies rattling down the street carrying a dozen cats. Media depictions of madness are all cardboard cut-out versions of the real thing, with their whole lives and personalities reduced down to madness. What we don’t hear of are the silent majority of mad people, those who go about their ordinary and fulfilling lives. Mad people are teachers, shop keepers, accountants and hairdressers. You see them in the street everyday. Often the madness is sleeping quietly on their shoulders, muffled by medication, and they are well. Sometimes the madness has a close grip round their neck, and they are not well, and that’s okay too.